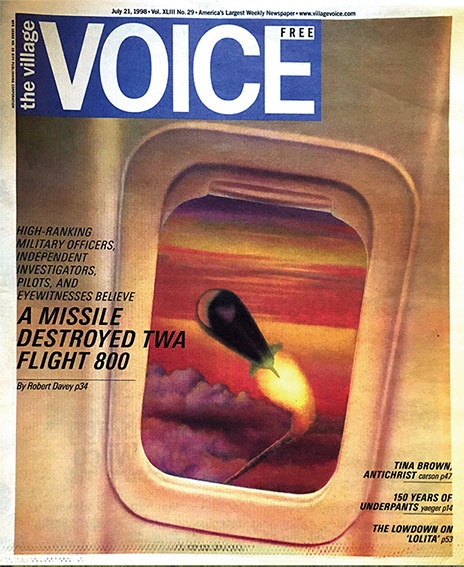 In January, more than 25 reporters attended a Washington, D.C., press conference, virtually a military briefing, that for all the actual media coverage it received might as well have been labeled top secret. At the widely ignored event, retired navy pilot Commander William S. Donaldson and former chairman of the Joint Chiefs of Staff Admiral Thomas H. Moorer announced that evidence existed to suggest that a surface-to-air missile brought down TWA Flight 800. They were joined by eyewitnesses who said they saw a streak of light rise into the sky over the Atlantic eight miles off Long Island before ending in an explosion that destroyed the Boeing 747, killing all 230 people aboard. It happened two years ago this week, July 17.
‍
The missile scenario presented at the conference, reported only in USA Today and a few other Gannett outlets, will not go away, even if major media continue to ignore it. Indeed, ongoing research and recent interviews by The Village Voice lend credence to the critics of the FBI and National Transportation Safety Board investigators who have yet to plausibly explain the crash. While the cause of the crash remains unknown, inadequacies in the official investigation are apparent. For instance:
With the second anniversary of the crash upon us, the families of the 230 victims and the flying public are still waiting for the investigation to answer the question: What ignited the explosion in the airplane’s center fuel tank? The NTSB believes the fuel-tank explosion is the sole cause of the catastrophe. The FBI and NTSB—with help from the U.S. Navy and other federal agencies including the CIA—have spent more than $40 million trying to explain the crash.
‍
The lack of answers should focus attention on the independent investigators who appeared at the January press conference and some of the assertions they made there. How can the suggestions and opinions of these highly credentialed military men be ignored by the media and the government?
‍
Admiral Thomas H. Moorer, U.S. Navy (retired), a navy pilot who served as chairman of the Joint Chiefs during the Vietnam War, was the heaviest hitter among those present at the press conference, which was sponsored by Accuracy in Media. (The sponsorship by this right-wing group, a rabid critic of mainstream media, perhaps explains why the press ignored the conference.) Moorer called for a congressional investigation into the Flight 800 crash.
‍
Admiral Moorer has most recently been at the center of the Operation Tailwind news scandal, in which CNN and Time magazine falsely claimed that U.S. forces sprayed lethal gas in Laos during the Vietnam War. The CNN program NewsStand and a Time article cited Moorer as a confirming source—which he immediately disputed after the show aired. CNN retained attorney Floyd Abrams to review the program’s reporting.
‍
In the ensuing report, Abrams scrutinizes more than seven hours of interviews CNN conducted with Moorer. The admiral, who is 86 and lives in an assisted-care retirement home, is no longer called as a source by the CNN Pentagon correspondent, though Abrams found that Moorer’s “memory remains satisfactory.” The attorney concludes that Moorer’s responses were severely distorted by CNN reporters and editors. “Viewed as a whole,” Abrams wrote, “Admiral Moorer simply does not come close to offering the sort of support for the conclusions offered by CNN that the program asserts that he does.”
‍
The Voice last week asked Moorer to confirm that he still stood by the criticisms he made in January about the Flight 800 investigation. He does, and when asked why he believes a missile might be responsible for the disaster, he told the Voice, “Because there were an extremely large number of observers who reported that they saw the missile in flight and the explosion.”
‍
Two eyewitnesses to the crash, Major Fred Meyer and Richard Goss, gave their accounts at the press conference. Goss, who was sitting on the deck of the Westhampton Beach Yacht Squadron on the evening of the crash, reported seeing a flare rise into the sky over Fire Island. Meyer said he saw a streak of light from his seat in an Air National Guard helicopter hovering about 150 feet over the runway at Francis Gabreski Airport, also in Westhampton Beach. Both men said the streak of light ended in an explosion—but Meyer, who flew rescue missions in Vietnam, went further.
‍
FRED MEYER WITNESSED THE FLIGHT 800 DISASTER FROM HIS SEAT IN AN AIR NATIONAL GUARD HELICOPTER. HE SAW A STREAK OF LIGHT THAT ENDED IN AN EXPLOSION. “IT LOOKED FOR ALL THE WORLD TO ME LIKE ORDNANCE, A WARHEAD.”
‍
The explosion, Meyer said, was “a high-velocity explosion. It looked for all the world to me like ordnance, a warhead.” It was followed, he said, seconds later by a second high-velocity explosion, which produced a burst of brilliant white light “like nothing I’ve seen before or since,” and then after a few more seconds, “a petrochemical explosion, which was the fuel burning—bright orange, mottled color, and a lot of black.” Meyer told the Voice he believes two missiles hit the plane.
‍
Rear Admiral Clarence A. Hill, who during a 40-year navy career served on submarines, was a navy pilot, and commanded a carrier, listened to Meyer at the January press conference. Noting that no eyewitnesses were invited to testify at the NTSB hearings on the crash, held in Baltimore last December, Hill told the Voice he found it extraordinary that a veteran who presumably had seen plenty of ordnance explosions during his service in Vietnam was not invited to testify at the NTSB hearings into the crash. (The FBI requested that the NTSB not discuss eyewitness testimony at the hearings because it could conceivably be needed as evidence if Flight 800 became a criminal case.)
‍
“For him to be discounted, there’s something wrong there,” said Hill. Citing lessons learned while investigating many air crashes during his navy career, Hill said, “One of the things you never, never did was discount any kind of information.”